WWF Sweden, appoints Pella Thiel, Vice-Chairman of Save the Rainforest Sweden, End Ecocide Sweden and coordinator of Rights of Nature Sweden, as the Environmental Hero of the Year 2019 in the category Biodiversity. Greta Thunberg is appointed as Young Environmental Hero of the Year and Magnus Carlson, singer in Weeping Willows wins the climate category. The award was handed out by the King of Sweden, His Majesty King Carl XVI Gustaf at a ceremony in Stockholm.

The motivation from WWF Sweden: ”With a clear voice, passionate debater and devoted spokesperson Pella Thiel speaks for nature. She spreads the message of the self-evident Rights of Nature in a clear and compelling way. Tirelessly working for an international law against ecocide and for global biodiversity, her voice for nature reaches across borders all the way into the heart of the UN.” 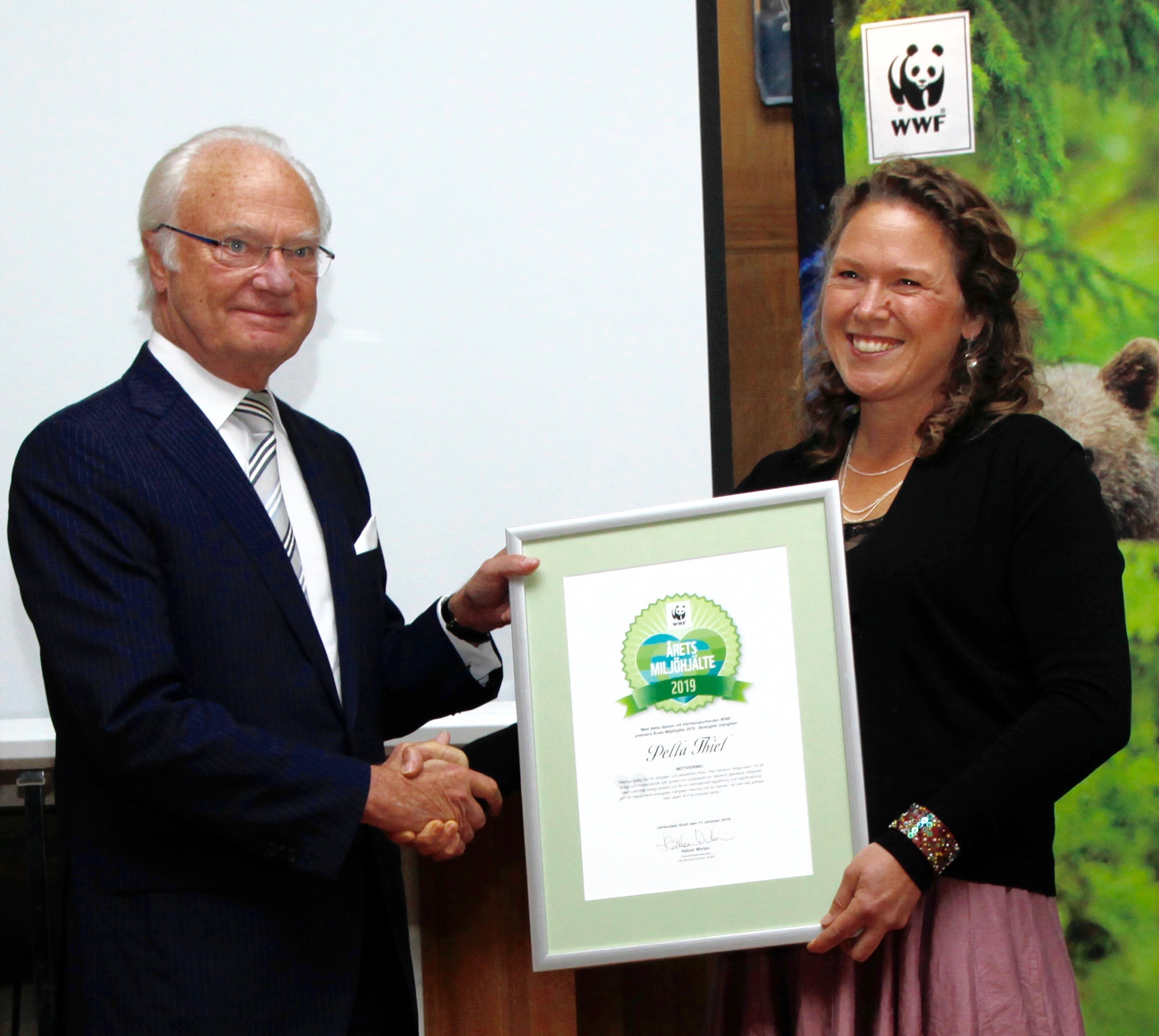 With this appointment, the WWF gives recognition not only to the worldwide movement calling for change, led by Greta Thunberg but also to global movements already implementing the change demanded.

Pella Thiel is the co-founder and Vice-Chairman End Ecocide Sweden, an NGO founded by her in collaboration with Earth lawyer Polly Higgins and others. She is the coordinator of Rights of Nature Sweden, an expert in the United Nations Harmony with Nature network as well as part of The Global Alliance for the Rights of Nature Advisory board.

Pella Thiel comments on the award: I am very pleased that the work for the Ecocide law and the Rights of Nature is highlighted in this way by the WWF. There is an increasing understanding, led not least by Greta and Fridays for Future, that society needs a transformation of economic, legal and political systems to deal with the ecological crisis. These among the most powerful ideas to base such a cultural shift on. Thanks to a global movement of activists, lawyers, indigenous peoples, churches and many others, it is already happening.

This website uses cookies to improve your experience while you navigate through the website. Out of these, the cookies that are categorized as necessary are stored on your browser as they are essential for the working of basic functionalities of the website. We also use third-party cookies that help us analyze and understand how you use this website. These cookies will be stored in your browser only with your consent. You also have the option to opt-out of these cookies. But opting out of some of these cookies may affect your browsing experience.
Necessary Alltid aktiverad
Necessary cookies are absolutely essential for the website to function properly. This category only includes cookies that ensures basic functionalities and security features of the website. These cookies do not store any personal information.
Non-necessary
Any cookies that may not be particularly necessary for the website to function and is used specifically to collect user personal data via analytics, ads, other embedded contents are termed as non-necessary cookies. It is mandatory to procure user consent prior to running these cookies on your website.
SPARA OCH ACCEPTERA